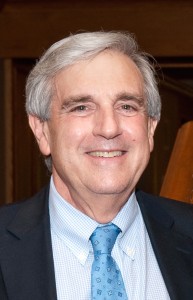 Dr. Eric Mazur is an internist and specialist in hematology/oncology. He retired one year ago from his role as Vice President and Chief Medical Officer of Norwalk Hospital, a position in which he served for 4 years. He currently co-hosts a weekly, health-oriented local cable TV show and works as an independent healthcare consultant.

As Norwalk Hospital’s Chief Medical Officer, Dr. Mazur was responsible for the medical staff and the quality of all medical care delivered at the hospital. Under his leadership, Norwalk Hospital established certified centers of excellence in lung and colon cancer, pelvic health, hyperbaric oxygen therapy, and joint replacement surgery. In 2010, 2011, and 2012, Norwalk Hospital received the Healthgrades® Distinguished Hospital Award for Clinical Excellence™, the only hospital in Fairfield County to achieve this distinction. Dr. Mazur also served as one of six Norwalk Hospital senior executives on the Integration Team planning for and effecting the merger of Norwalk Hospital with the Western Connecticut Health Network in January 2014. Also in 2014, Dr. Mazur received the William J. Tracey Award from Norwalk Hospital for the doctor who best displays leadership, character, involvement in community service and exemplary clinical skill. Other recent achievements include recognition in 2012 as Master, American College of Physicians, one of only ten living internists in the State of Connecticut so honored, and receipt of the William F. Thornton Award for teaching and medical education from the American College of Physicians. In the last several years, Dr. Mazur has been named repeatedly by Castle Connellyâ to “Top Doctors: New York Metro Area” and listed in Best Doctors in Americaâ.

Prior to his role as Chief Medical Officer, Dr. Mazur served for 16 years as Norwalk Hospital’s Chairman of the Department of Medicine. During that time, he focused his leadership efforts on achieving measurable quality in patient care, excellence in resident education, the introduction of computerized medical records, and the development of a novel teaching hospitalist program that received national recognition. Dr. Mazur also participated in the founding of the Norwalk Community Health Center in 1994, serving on its medical staff and on its Board of Directors from its inception until 2005.

From 2005 to 2009, Dr. Mazur served as the elected representative of Connecticut’s internal medicine physician community as Governor of the Connecticut Chapter of the American College of Physicians (ACP). As ACP Governor, Dr. Mazur was very involved in political advocacy, annually visiting Washington, D.C. to lobby on behalf of primary care, internal medicine, and healthcare reform. For these activities, he received the “Top 10 Key Contact Special Recognition Award” from the ACP in 2005.

Since 2002, Dr. Mazur has served as co-host of “Health Talk”, Optimum TV’s nightly “Local Programming” television show that provides health education for much of lower Fairfield County. During the past 15 years, he has hosted over 575 half hour ”Health Talk” episodes, covering subjects from bunions to pet therapy to cancer research. He has also been a frequently requested guest for local television news and health programs and a popular invited speaker for local community organizations.

Born and raised in Fairfield Connecticut, Dr. Eric Mazur was graduated Phi Beta Kappa and summa cum laude from Princeton University in 1971 with a B.S.E. degree in aerospace and mechanical sciences. In 1975, he was graduated Alpha Omega Alpha from the Johns Hopkins University School of Medicine with an M.D. He completed his first two years of internal medicine residency at the Strong Memorial Hospital, University of Rochester and returned to Connecticut in 1977, completing his internal medicine residency and a hematology/oncology fellowship in 1981 at Yale University. Dr. Mazur spent the first part of his career as Chief of Hematology/Oncology at Miriam Hospital and on the full time medical school faculty of Brown University in Providence RI. At Brown and Miriam Hospital, he developed an active clinical and academic hematology/oncology section and also led a scientific research laboratory that created novel test tube models for studying human blood platelet production. Dr. Mazur has published over 45 scientific papers and his research has been presented both nationally and internationally. He moved to Norwalk Hospital in 1995 where he worked in senior leadership for 20 years. He is currently an Associate Professor of Clinical Medicine at the Yale University School of Medicine.